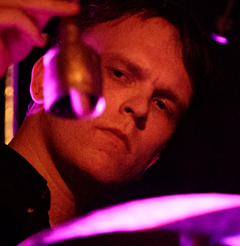 Britton Powell is an American composer based in New York. Through means of electronics, video, and percussion his work explores psycho-acoustic phenomena, minimalism, and traditions of non-western music. The composer's new work “If Anything Is” explores themes of hyper-reality and capitalism through a mixed-media environment designed for sound and multichannel video. Filmed and recorded over the course of 2019 the work explores an ecstatic exchange of experience in the face of a much-accelerated media and commercial world. A meditation on the intersection of technology, ritual, and urban landscape, the work draws a map through scenes filmed in New York City and points the audience towards the collision at this crossing.
Powell’s music has appeared at venues around the world including Centre Pompidou (Paris), The Barbican Center (London), Today’s Art Festival (Den Haag), Ultima Festival (Oslo), Unsound Festival (Krakow), The Kitchen (NYC), and The Guggenheim House (Japan). His work has been featured in The New Yorker, Washington Post, Bomb Magazine, and Wire Magazine among others. He has worked on recordings for Warp Records, Mexican Summer Records, Unseen Worlds, and Catch Wave Ltd. Powell has worked and collaborated with Jon Hassell, Matmos, Lucy Railton, Jon Gibson, Huerco S, and many others.